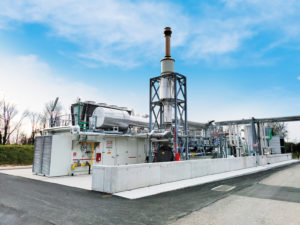 Milan, Italy – Dipharma Francis S.r.l., (Dipharma), a global CDMO and leading manufacturer of Active Pharmaceutical Ingredients and Intermediates, is pleased to announce that a new state-of-the-art trigeneration unit has officially entered into operation at the Dipharma Francis S.r.l. facility in Mereto di Tomba (Italy), after the conclusion of the authorisation procedure by the environmental and energy authorities.

With an investment of over €2 million, the trigeneration system, or Combined Cooling, Heat and Power (CCHP), provides simultaneous production of heat, electricity and cooling of glycolate water, all from a single high-performance process.
The electricity and heat are produced by the cogeneration process and the cooling energy is obtained through an absorption chiller which uses hot water to provide the energy needed to produce cool glycolate water at 0°C.

Fuelled by natural gas and with an electrical power of 1.5 MW, the new unit brings valuable benefits: 20% increase in energy efficiency and a reduction in CO2 emission of about 2,300 tons, resulting in a significant positive impact on the environment and sustainable development.
In one year, the CCHP system will cover an average of 80% of the production plant’s energy needs, on top of over 30% of the steam required from the plant and the cooling energy in the form of glycolate water, accounting for 90% of the plant needs at 0°C.

“Dipharma Group has embarked on an energy efficiency journey that takes us on an ongoing search for sustainable and future-oriented solutions” said Jorge Nogueira, CEO at Dipharma Francis S.r.l. “.The new trigeneration unit represents an important milestone along this path and joins the cogeneration system that entered into operation two years ago in another Italian facility. Both represent key high-tech investments, covering the energy needs of our growing production sites with respect for and protection of the environment”. 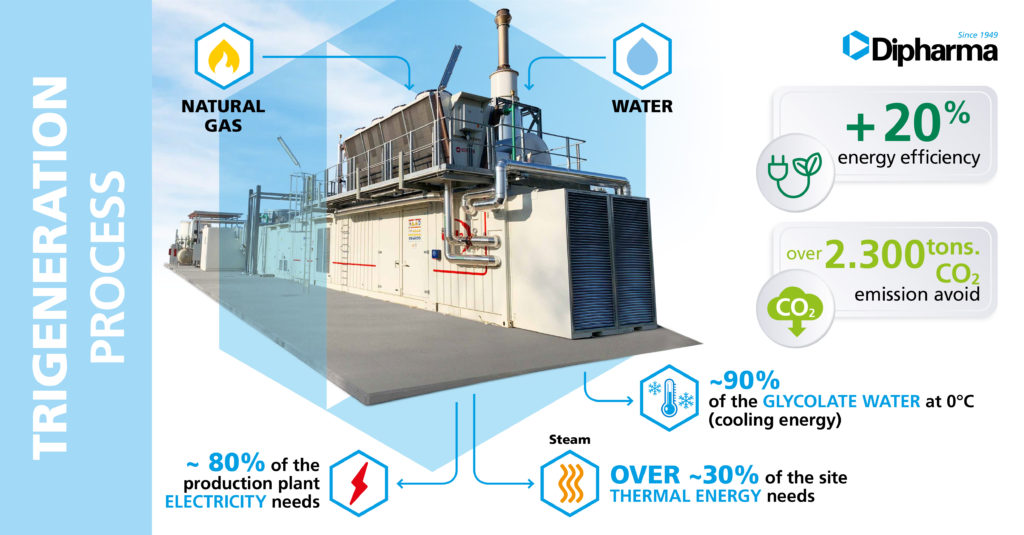 About the Dipharma Francis group
With revenues exceeding €125 million, Dipharma is a global CDMO and one of the leading family-owned manufacturers of Active Pharmaceutical Ingredients and Intermediates, with commercial offices in Italy, U.S.A. and China. Its fully-equipped R&D Centres, located in the U.S.A. and Italy, develop innovative chemical processes and crystalline forms for the most prominent pharmaceutical companies worldwide. As witness of Dipharma’s innovation, the Company has filed over 250 patents and patent applications and its scientists contributed as authors in more than 1,200 scientific papers. Since 1970, Dipharma has succeeded in achieving a positive unbroken record of major Regulatory Agency inspections and its manufacturing sites are governed by the highest cGMP Quality System. They are equipped to supply quantities from laboratory to industrial scale, covering the entire lifecycle of a molecule.